Curley & Pynn - The Strategic Firm » Insights » White Papers » Public Relations & Marketing Communications: It is All About the Questions You Ask

Public Relations & Marketing Communications: It is All About the Questions You Ask

Every manager, every C-suite executive, every business owner today knows that part of his or her responsibilities is to manage public relations and marketing communications activity.

In an increasingly complex media world where estimates of the number of messages bombarding us range from 4,000 to 10,000 per day, to the untrained eye this can seem like an overwhelming and complex maze of decisions that could go terribly wrong and have enormous bottom line impacts.

While the practice of public relations and marketing communications is complex and requires that practitioners work hard to stay abreast of ever-changing techniques and technology, this paper is to suggest that there are five simple questions that drive the whole process.  (Note:  When I first wrote this white paper years ago, it presented four questions.  However, I’ve realized that one more is necessary.  Read on and I’ll explain.)

The purpose of this paper is to help the non-practitioner better understand how communicators go about the development of programs that help their clients solve problems and take advantage of commercial opportunity.  In the end, it should help managers at all levels make better decisions about how their communications budgets are spent.

It Starts with Audience Identification

Think of public relations and marketing communications like bow and arrow hunting.

If you can’t see your prey, it is hardly worth pulling an arrow from your quiver.  You’ve no doubt heard the phrase “target marketing,” but what does it mean?

Imagine you’re leading an effort to secure support for a new commercial development.

The most basic question you have to ask is simply “Who Do We Want to Communicate With?”  Your answer could be as simple as a list of a half dozen key decision-makers on a city council who will vote a project up or down, or it could be a list of special interest groups who could influence their decision … such as:

It could be even more complex and you might have to break those groups down even further, either due to strongly held opinions and positions determined by research or because of different media needed to reach them, i.e.:

It is easy to see that each of these subsets will need a strategy if you are to communicate effectively for your project.  But before you start, there are other questions to answer now that you know who you want to communicate with.

Hold that Arrow Just a Second

Just as it goes without saying that you don’t want to pull back your arrow before you can see the target, you probably want to know a little more about the target before you let it go.

For instance, you’d want to know how far away the target is so you know how far back to pull in order to get the arrow to go the distance.  In communication, the one thing you have to know about the people you want to communicate with is “What Do They Know About Us?”

This is what communicators call the Research Phase … and it is incredibly important.  Think for a second, you may perceive that everyone is opposed to your project and set off to convince them otherwise without doing any research when, in fact, if you conduct a survey you’ll find that all they want is for you to make a commitment to landscaping and water retention ponds.  In the case of our town council example, it would probably require the use of several tools, such as:

Now that We Know Our Prey …

This is the beginning of the campaign … where you determine the key messages that your research has told you will resonate, will respond to the public’s concerns and will help you either convince them to change their mind (if you find they were opposed) or will reinforce their positive disposition to support you.

But here is where I realized that for all these years the one question we got most often is “How Will We Reach Them?”  And in this age of such diversified media, social media and technologies empowering more direct communication and influence than ever before, how and where we will reach our audiences is critical.

Here’s an example of how that worked on a project we managed for the Economic Development Council of St. Lucie County on Florida’s Treasure Coast.

St. Lucie County, Florida, for years had a tax abatement incentive program to drive economic development, which was set to expire.  Continuation of the program, which provides tax relief to companies relocating or expanding in the area, required a public referendum.

County leaders believed it would be a tough sell, and that the message that would resonate with voters is how incentives create increased tax base.  But, they had forgotten the most important part of any communications strategy … research.  They were basing their strategy on their own experience, rather than on the perceptions of voters.

We conducted statistically accurate research that showed voters overwhelmingly were in favor of the program, but that they were unaware it was up for renewal or even where the referendum would appear on the ballot.  We also found that “jobs,” not tax base, was the real issue.

Armed with this information, we conducted a countywide campaign to communicate two key messages.  What we wanted them to know was:

What we wanted them to do was simple: 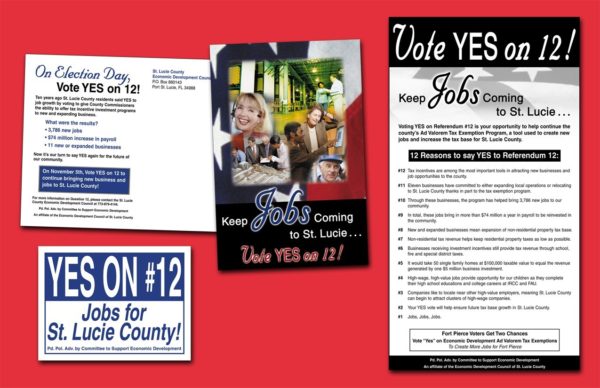 And how to teach them was, in this case, relatively simple because we were simply trying to reinforce support we already knew enjoyed support … but simply needed to create top-of-mind awareness among likely voters.  Above you see postcards mailed directly to likely voters, pocket cards our supporters could use to enlist their friends, and the beloved yard sign … all containing that simple key message.

The referendum passed with more than 66 percent of the vote.

I’m reminded of the great bow and arrow hunter Howard Hill who said:

“Unless you know your game’s feeding, sleeping and daily habits, unless you plan your hunt in great detail and follow your plan with precision, you are not hunting at all … you’re just walking in the woods.”

Every project … every company needs a strategy … and that strategy always begins by asking the five questions we’ve reviewed:

Roger Pynn, APR, CPRC, has been part of Florida’s professional communications community since the late ‘60s … beginning his career as an award-winning journalist with the Orlando Sentinel, where he rose from reporter to metropolitan editor.

Since the early 1970s, he has been involved in both consulting and corporate-based public relations, and prior to establishing Curley & Pynn, he directed public relations for Westinghouse Electric Corporation’s Power Generation World Headquarters in Orlando.

Pynn is accredited by both the Florida Public Relations Association and the Public Relations Society of America.  A former president of both organizations’ Central Florida affiliates, he served three times as a statewide vice president of FPRA, and has co-chaired the Ethics Judicial Panel of PRSA for Florida.

He is a frequent speaker before national trade and professional associations, public relations organizations and college classrooms on topics of ethics and issues management in public relations.